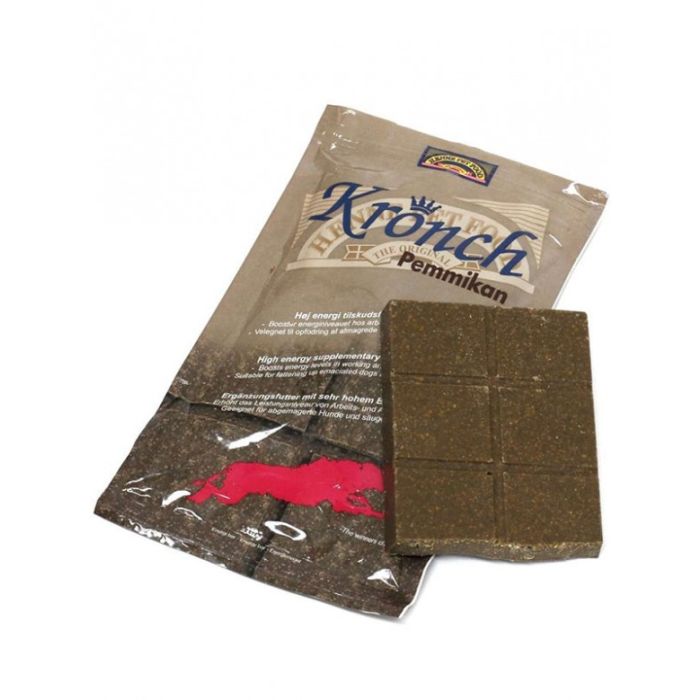 Skip to the beginning of the images gallery
Details

Pemmikan is an energy feed block, which contails approx. 6000 Kcal/Kg. Pemmikan makes it possible to give your working dog a needed energy boost just before a demanding task without overfilling the dogs stomach.

Pemmikan was specialy formulated for working dogs such as gundogs, sledge dogs and working police dogs. It is now used world wide for trialing and gun dogs dogs too.

Pemmikan reduces the stress dogs encounter in dog shows and other similar situations, such as long waiting periods. It also makes the handling of the dog easier.

The effect of Kronch Pemmikan sets in after about half an hour and reaches its peak after about an hour and a half. Because of this, it may be advantageous to divide the daily ration into many smaller portions. Doing so allows your dog to perform at its best all day long.

It is also an excellent product for feeding undeweight dogs without over filling the stomach.

Gundogs both beating and picking up should be given no more than two squares during the day and this will give them the feed, energy and warmth required to last throughout.

Kronch Pemmikan is suitable for lactating females, that produce too little milk for their young as it can help increase their milk production, and removes the need to bottle feed their puppies later on. Kronch Pemmikan also prevents weight loss in lactating females. The lactating female is fed from half a piece to 4 pieces of 50 g on a daily basis. The amount fed depends on the dog’s race, size, and the number of puppies it has.

100 to 200 grams per day (depending on the dog’s weight and activity level before lunch) is fed to highly active working dogs, such as show dogs, hunting dogs, guard dogs, sledge dogs, police dogs, and dogs entered in competitions. The daily ration is divided into 3 parts: morning, midday, and evening. It is recommended not to feed the female too many and/or too large portions, as doing so may lead to the female getting loose stools.

More Information
Reviews 1
Write Your Own Review
Only registered users can write reviews. Please Sign in or create an account